When my daughter was born last year, I knew I would struggle with the whole ‘balance’ thing. I was looking for a way to be both the kind of mother I had growing up AND the thriving entrepreneur running her own business. My first challenge came when she was 5 months old and I was invited to Yukon to work with a client, Ranj Pillai.

Ranj was running for a seat with the Liberal Party of Yukon and he wanted my help to create a compelling, and authentic, narrative to build his campaign. He also wanted me to connect with Champagne Aishihik First Nation as he knew they could use some support in telling their story to a wider audience. 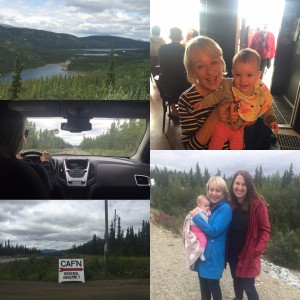 I asked my own mom to fly up to Whitehorse with me so that she could look after my daughter while I met with my clients. For the most part, it was all relatively easy to set everything up. Hanna was great on the airplane, and we rented an apartment to have the same comforts of home. Where it proved difficult was the 2.5 hour back country drive to the CAFN General Assembly. The drive itself was hard because of all the twists and turns, not to mention the gravel road, yet the trickiest part was my attention span. I would be listening to an elder share her story and I would see my daughter fussing in the background. I would sit in on a panel discussion and my mind would wander to my daughter, wondering if she was hungry or needed me.

The hardest part was letting go of who I was before and accepting my new reality. I’m a working mom, and with that comes highs and lows. I get to go out into the world and help people understand their impact in a whole new way. I also get to show my daughter that I turned my passion into a career. I also have to accept that my memory isn’t what it used to be, and I can get easily distracted. I will never be fully one or the other; I can’t compartmentalize my two worlds.

Coming home from that trip, I sat down with my husband and we laid out a plan for how we were both going to run our own businesses and be the kind of parents we wanted to be at the same time. We have since introduced a schedule that works for both of us, and while we do change it from time to time, we can now plan accordingly. We can set up meetings on certain days knowing our daughter is being taken care of. We also set up safety nets; when Hanna gets sick, we need to be able to shift things around. We have enlisted the support of our village – friends, family, neighhours – to help us raise our child.

And when it comes to travel and being on the road, I’ve decided not to focus on that right now and instead work with local businesses so that I support my own community! As for Ranj, well he won his seat and went on to become Deputy Premier! I hope to work with CAFN later this year, since I got to see first hand the power of their story and I want to help them share that far and wide.